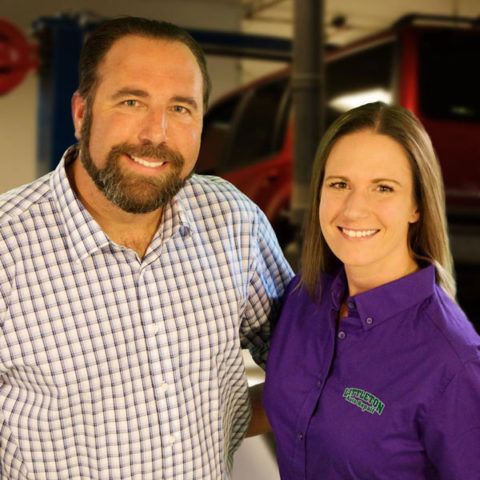 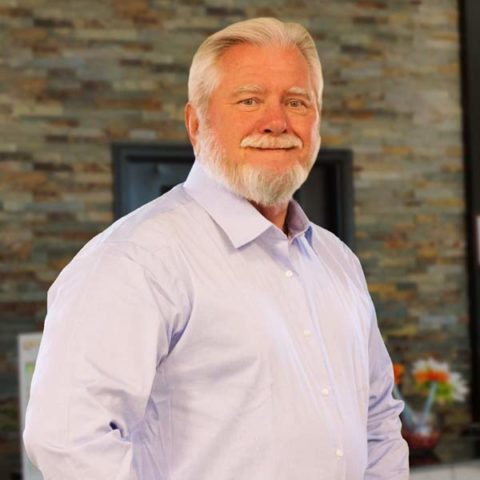 Alex is our friendly, helpful customer service go-to-guy. He is the one to pick you up or drop you off with our shuttle service.

Cameron Welch is our General Service & Preventative Maintenance Specialist born & bred right here in the North Range. Cameron is part of a men’s ministry, where he is involved in outreach programs that provide support and education to members of the community. We all look up to Cameron as he is the youngest employee on our team, yet we learn so much from him. When he is not helping others, he likes to spend his time in the high country, hiking, fishing, and backpacking. While he’s not one to shy away from the difficult trails, he still has an appreciation for enjoying the rewards of the trails less traveled, you can be sure that his backpack has a hammock in it. A skilled hunter, you’ll find a line of people in front of him during hunting season, I mean, who doesn’t like tasty elk burgers and sausage right? Cameron lives with his Blue Heeler, Sophie, so naturally he also has a collection of bite resistant shoes! And of course, he has a natural affinity for cars as well, when he’s not working on a customer’s car, he is working on his own. Between cars and snowmobiles, he’s a regular Ricky Bobby. Thanks for taking the time to meet Cameron! 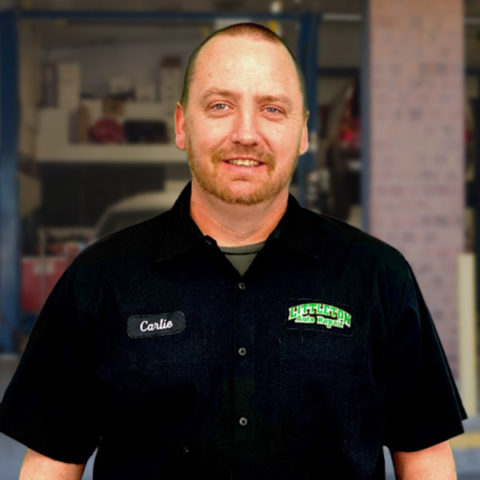 Carlie Hampton is our Lead Technician. He grew up in Wheatland, Wyoming. Carlie was a big part of the fabric that hold towns like Wheatland together. Carlie joined the United States Army in 1998 where he became an expert in repairing and maintaining the M1 Tank (The Biggest & Most Powerful) track vehicle available to the United States Army! He went to Afghanistan and ultimately parted ways with the Army to focus on his family and future in late 2002. Carlie attended college here in Colorado, learning to work on all makes and models of vehicles, eventually making him a great fit for our shop! After graduating at the top of his class, he grew accustomed to the warmer weather and lack of wind in Colorado and decided to make it his home. He and his wife have lived here ever since, and in 2007 they welcomed their amazing daughter into the world. Carlie is happy working on vehicles that don’t require jet fuel, however, should you own one, he still remembers how to fix a tank, and get yours running like it did the day it was new, just don’t expect any type of gas mileage out of it, it’s still a tank! Thanks for taking the time to meet Carlie! 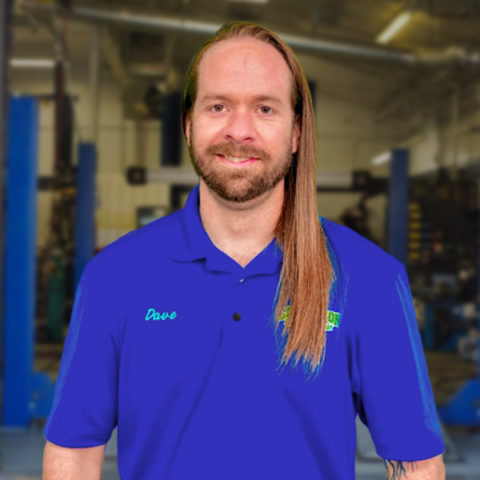 Dave Garlick is our General Manager. He is another Colorado native, born and raised right here in Littleton. Dave graduated from Chatfield High School in the class before September 11, 2001. Dave, being the god-fearing patriot and hero he is, walked into the United States Army recruitment office on his 18th birthday and decided to defend us all from the evildoers that perpetrated the horrific attack and fight for the freedoms and liberties we all share today. He was stationed in Ft. Lewis, Washington, where he was deployed to Iraq in 2004-2005. Dave suffered the loss of dozens of fellow service men while serving America, however he didn’t leave without leaving his mark oversees protecting America & the American Way! He lived in Tacoma for a few years after he got out of the military, as he grew to love the Pacific Northwest. As a lifelong muscle car enthusiast, he returned to the automotive industry upon leaving the service. Like most Colorado Natives, he couldn’t stay away for too long and returned home in 2010. These days, he enjoys a laid-back life with hobbies like archery, long range rifle shooting, being a movie buff, and trying to learn to play the guitar, although his neighbors probably don’t appreciate that part as much as he does. After traveling to far away reaches of the world, he is excited to be back to where he always knew he belonged, the same place it all began, and even more so to be a part of Littleton Auto Repair, the Friendliest Auto Repair Anywhere. Thanks for taking the time to meet Dave! 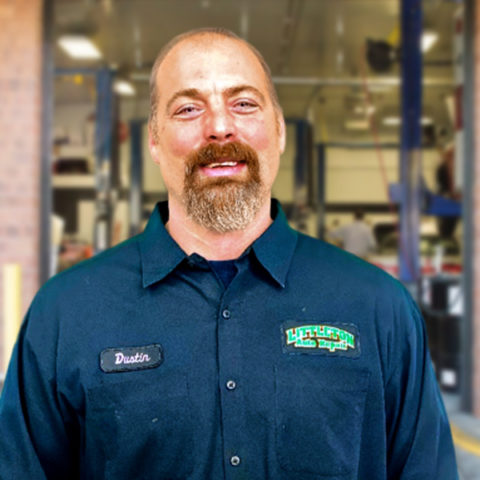 Dustin Jorgenson is our Shop Foreman A.K.A. “The Car Whisperer” as people have come to call him. Dustin was born & raised in St. George, Utah, where he developed a lifelong love of the outdoors, since the day he learned to walk, he was more at home in the hills, fields, and streams than he was in a living room. He can still recall the day that changed his life forever, riding in the truck with his dad to go pick up a classic mustang for his older brothers’ birthday. Ever since that day, he has had a love of all things automotive, especially any kind of Mustang. This led him to pursue his Associates degree in Applied Science in Automotive Technology, where he graduated with honors. A few years later, he was drawn to Colorado by his sense of adventure and the love of our mountains. He has been living his dream and pursuing his passion ever since. Whether he’s keeping a daily driver running in ship shape, or breathing new life into an old retired relic from yester-year, he found his calling in automotive service. When all of the work is done for the day, he hangs his hat in Denver where he lives with his wife and two adorably cute dogs, Scrappy and Gypsie. Thanks for taking the time to meet Dustin! 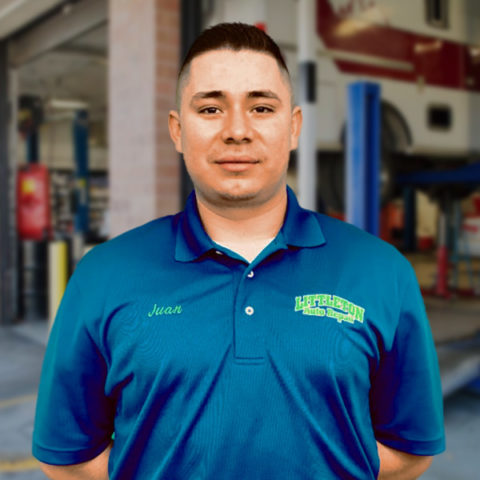 Juan Camacho is our Senior Director of Parts & Service. He is definitely a warm and friendly face you will encounter at our Service Advisor Counter. Like many others drawn to the beauty of the front range, Juan comes to us from the City of Angels, where he grew up as a young tyke. Juan brings that “car guy” feel to our family here, as one of his hobbies includes working on his Race Car (A Subaru Impreza WRX) and tuning and adjusting each and every part getting those big horsepower numbers to the ground. When he’s not pounding the pavement at the drag strip, he’s representing the USA in worldwide boxing tournaments as a Golden Gloves USA Olympic Boxing Champion boxer. At the end of the day, he enjoys going home to his family and is loving life here in Colorado, the only place he’s happy to call home. Thanks for taking the time to meet Juan!

Matt Weller is our General Service Technician that can perform a wide range of testing and repairs. Another Colorado native, Matt enjoys ice hockey, being a new dad, fishing, hiking and snowboarding. He was born and raised on Chatfield Lake and has spent his entire life in Colorado. When he’s not wrenching on cars or outside doing his hobbies, he is sure to be with his beautiful 2-year-old daughter (who thankfully looks like her mother)! Thanks for taking the time to meet Matt!

Cricket Ridley is our Office Manager, Shuttle Driver, Parts Delivery Person, Lunch Acquisition Specialist and overall shop mom! Recently returned to Colorado from Minnesota, she has been a huge addition to the team. Always happy and eager to help the rest of the staff, as well as customers. Prior to joining our team, she owned a beauty salon and worked in the cosmetology field, which is a huge help here as one of us always needs a haircut! You’ll have the opportunity to get to know her better on the ride home from dropping your car off. Thanks for taking the time to meet Cricket!

Matt Paille is a service advisor coming all the way from the Big Easy! A native to New Orleans, Matt moved to Colorado with his wife 4 years ago, and has quickly taken to the culture and the scenery as most that come to our state do. Matt enjoys taking his truck up to the mountains and exploring the Rockies. He also likes finding new and exciting restaurants, and comedy clubs to go to on his off time. He also brings a touch of nostalgia to the shop, as he LOVES oldies, classic rock, and the music of yester-year. Thanks for taking the time to meet Matt!

Call Us Today for a Free Estimate

Call Now
Back to the top